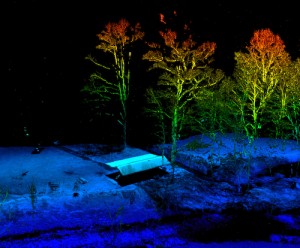 Over Memorial Day weekend, Paul Kinder, Jr., was fishing for walleye on Lake Erie. But our conversation concentrated on other bodies of water and a sanctuary for those who’ve earned special access to enjoy the outdoors.

Nestled on 500 acres of private land close by the greenery and mountains of the Monongahela National Forest, the non-profit Patriots 4 (P4) Outdoor Resort in St. George, West Virginia, offers respite to wounded veterans and their families. While other service members and civilians are welcome at the non-profit haven, the resort offers Purple Heart vets free short-term stays in four handicapped-accessible cabins, a tracked wheelchair and a solar-charged, hydraulic-actuated hunting platform. With the assistance of trained guides, differently abled visitors can hunt, and gain easy access to the Clover Run trout stream, as well as to frontage on the Cheat River for kayaking, tubing and the like.

Dr. Kinder himself is not a veteran, but as director of the Natural Resource Analysis Center and manager of the Geospatial Analytics Program at West Virginia University he is something of a “connector” for this project. He’s on the board of Patriots 4. He’s used LiDAR for more than a decade. And he and his team of graduate students recently deployed a RedTail LiDAR Systems RTL-400 to aid in a stream bank restoration that improved and documented as-built conditions and ensured safe guest quarters. 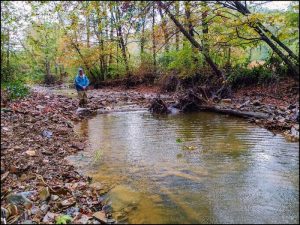 Patriots4 is the vision of General Randall “Randy” L. West (Ret.), a decorated Marine who is now at once a national security consultant and an ordained lay minister. Kinder: “He said, ‘all those years of combat and never got hurt.’ This was his way to give back.’”

The Clover Run trout stream is one of the site’s centerpieces. But over the years, human influence and heavy flooding had eroded its banks and led to severe habitat degradation. Safe access and even one of the cabins were threatened.

To renew the site, Patriots 4 tapped a partnership between Kinder’s resource analysis center, the WV Division of Natural Resources and the USDA (the agriculture department) Natural Resource Conservation Service. Kinder’s credentials as a lab scientist, drone operator, and research professor in resource economics and management all fit the project’s profile.

“Strangely enough, I got involved with General West and his crew through a congressman that I knew well, who knew that I knew how to hunt and fish,” Kinder recalled. “He asked me if I wanted to go and guide these guys.” Kinder and his family would take canoe trips down the river with wounded vets, but he’d also leverage his professional expertise. “It was serendipitous that I was working for our Department of Natural Resources doing stream restoration across the state. I talked them into going in with P4. It’s been a real win-win.” 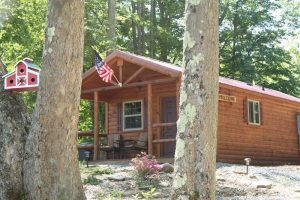 Kinder’s first exposure to LiDAR dates to when he began teaching at West Virginia a dozen years ago. The school had purchased an OpTech back in 2004. “That was a million-dollar [LiDAR] sensor on an airplane. We mapped about 50 percent of West Virginia, the coal fields. It flew all over the country. But it cost us like $70,000 a year just for maintenance. We were like, ‘I can’t do this.’ We sold it, and I just got interested in drones.” In 2013, a Florida-based company helped Kinder put a FLIR camera on a DJI Phantom One. “I was trying to measure stream temperature with thermal imaging.”

Send in the Drones

Kinder connected with RedTail when the owner of parent company 4D Tech Solutions enlisted him to help commercialize technology licensed from the U.S. Army Research Laboratory (ARL). “I’m not an engineer but I know what a good system looks like and what it has to do,” Kinder said. 4D Tech Solutions is a Service-Disabled Veteran-Owned small business, and RedTail president/CEO Brad DeRoos, a Naval Academy grad, was enthusiastic about using his LiDAR system to commemorate military sacrifice. “RedTail’s ability to generate highly accurate and high resolution point clouds…is a great example of the many uses for drone-based LiDAR,” DeRoos said. “We are thrilled to have been a part of this important project.”

The Patriots 4 restoration began three years ago. Kinder and teams of his graduate students surveyed in the first year with an initial drone. “Last year we did construction on part of it, and then more surveying.” By August 2019, failing banks had been identified and restored, the jeopardized cabin stabilized, and 22 habitats enhanced with log-rock structures to maintain fish pools and prevent further erosion.

This past December, the Clover Run corridor was flown to document the as-built conditions and monitor the stream’s long-term health. Kinder noted technical issues with the initial LiDAR system, so he and his team phased in RedTail’s RTL-400. “Superior, high performance and efficient” in Kinder’s words, the RedTail unit’s microelectromechanical system (MEMS) mirror-based laser scanner produces accuracy by evenly distributing laser points on the ground, moving side to side 400 times per second with a laser pulse rate of up to 400,000 per second and an optimized scan angle of 35 degrees. A single 20-minute flight at 262 feet and 18 miles per hour yielded an accurate, high resolution 3D map.

Kinder ticked off the advantages brought by LiDAR, and by the RTL-400 in particular. “Oh, wow: speed, efficiency, accuracy, confidence. The work flow is incredible. We can pop it on a DJI Matrice 600 and in 15 minutes, we’re airborne. And the data processing is smooth.”

The change from Kinder’s early days with LiDAR “is really mind-boggling,” he mused. “When we had the man-based airborne system, we were really happy if we could get a shot per square meter on the ground. That was incredible data. Now we’re getting 500.”

Meanwhile, rehabilitation continues. “This year, we’re going to finish up the last half-mile of restoration. We’ll do, probably, another 20-some fish habitat enhancement this summer—starting in two weeks, actually.” Annual RedTail overflights will monitor and compare the health of the stream.

“Overall,” Kinder concluded, “it’s a labor of love. I wasn’t military but I see a lot of hurt and damaged people come and enjoy the environment. To be able to use this technology to really do a good job, and then blend in young people, learning GPS, learning how to do automated flights with drones, learning how to process that data and analyze it and come up with a restoration plan—there’s just a lot of vectors going on there. It’s a very personal satisfaction.” 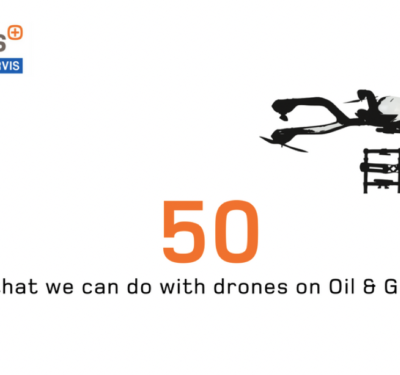 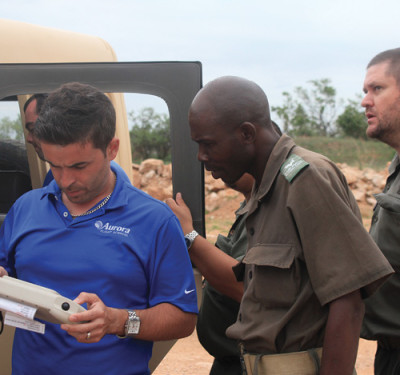 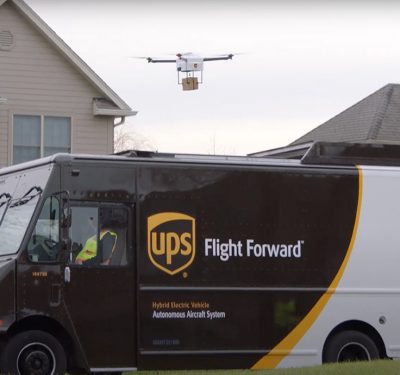 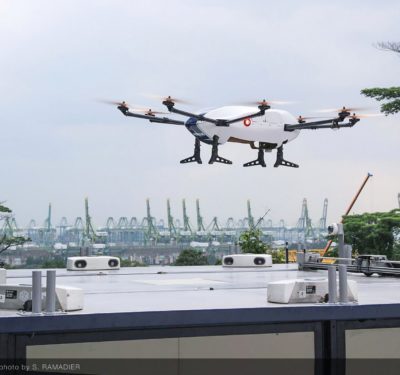