Just as with teams of people, so much more ground can be covered when multiple unmanned aircraft systems (UAS) work together.

But for that to happen, UAS must be able to communicate with each other and make decisions based on the team’s overall goal—technology researchers at the University of Colorado Boulder have been working on developing for years.

What they’ve come up with combines a robust wireless communication network, an operational interface that gives the pilot the situational awareness needed to monitor multiple aircraft, and a speciaized autonomous algorithm. The algorithm enables the drones to make local decisions and then communicate those decisions either directly to each other or to a centralized ground station that then distributes the information, said Eric Frew, associate professor of the Ann and H.J. Smead Aerospace Engineering Sciences at the university. He’s also the project lead.

Over the summer, Frew and his team spent three weeks testing advanced drone swarming technology at the Pawnee National Grassland near Greeley, Colorado. To do this they applied for, and received, the first approval granted by the Federal Aviation Administration (FAA) to conduct flights with a single pilot managing multiple aircraft. During the test flights, the aircraft located moving radio beacons and then followed them.

“The different aircraft reason about what they can sense, what their teammates can sense and the best thing to do individually with the awareness of the team’s goal,” Frew said. “Sometimes they do that decision making in a centralized way with a ground station that can reason about all vehicles. We’ve also done work where individual aircraft make their own decisions but (each) are aware of how those decisions help its teammates. The specifics depend on the scenario or the mission, if they’re providing a communication network, taking a picture of a target or using radio beacons to determine a location. Either way, the communication piece allows them to share their own information with each other. They’re able to share what they measure and what they’re doing.”

This type of swarming technology can be used for a variety of applications, Frew said, such as finding lost hikers and skiers, tracking wildlife more safely and more economically, and predicting severe storms, such as intense tornados. 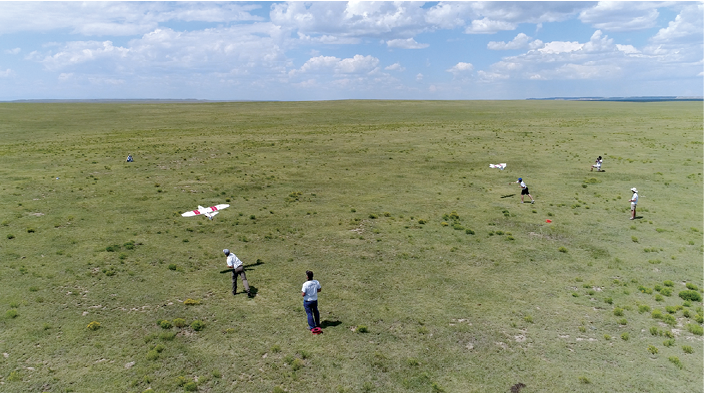 During this summer’s test flights, the team flew up to three fixed-wing aircraft at once to localize the position of radio beacons, Frew said. The drones had antennas with very narrow patterns that could only detect a signal if pointed at the target. The aircraft organized themselves in a way that made it possible to determine the location of the different targets that were set up in the environment.

The project was completed in collaboration with the Korean Advanced Institute of Science and Technology, a public research university in Daejeon, South Korea. The Korean team developed the control algorithms to coordinate the aircraft, and the CU Boulder team implemented the algorithms and flew the UAS.

“We’ve also developed our own algorithm and can perform the same type of activity,” Frew said. “This demonstrates not only swarming but that we have a system capable of multiple types of swarming operations or experiments.”

Multiple drones collaborating to detect emitters, as they did during this recent testing, could help first responders locate missing hikers or skiers through their cell phone signal—even if they aren’t near a cell tower, Frew said. The technology also could be used to more easily track wildlife wearing signal-emitting collars, which is one of several applications partner Colorado Parks and Wildlife is interested in exploring.

The agency hasn’t reached the testing phase with this technology yet, said Mat Alldredge, who is part of the research team for the agency, but they hope to get there soon. For now, the CU team is educating the agency on the benefits single and multiple drones can bring, and helping them find ways the technology can save them money, enhance safety and make them more efficient. 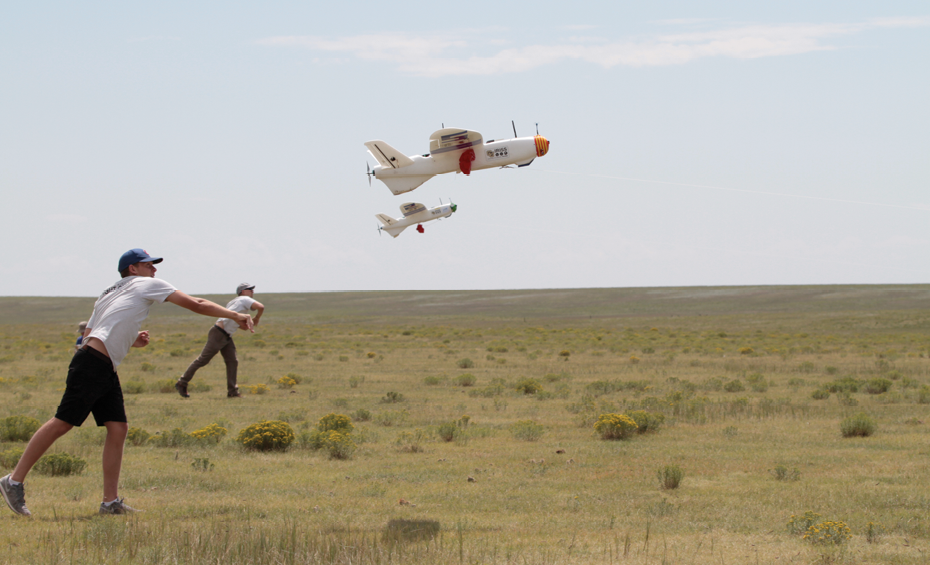 One of the more simple applications the agency is considering involves monitoring how wildlife impact crop health, Alldredge said. Deploying UAS to track high frequency signals to locate wildlife is a more complex application Alldredge sees the agency possibly implementing a few years down the road. Today, the agency deploys manned aircraft to complete wildlife surveys, which can be pretty expensive and dangerous. The airplanes fly low to the ground for hours at a time so researchers can count the animals and determine population sizes. Being able to verify counts using drone video that can be replayed would be a huge benefit in both cost and time savings.

“Now we have planes go up at least once a week to fly collars on all kinds of different studies to listen to the VHF signal and find out where the animals are, if there’s mortality or if they’re still alive,” Alldredge said. “On some projects we have to recapture animals every year, so we might have an airplane in the air trying to find deer. When they find them, they call in a helicopter and the helicopter does the capture. So you have an airplane circling overhead 10 hours a day and a helicopter flying 10 hours a day. If we can do that with a drone or drones to localize and tell the helicopter here’s where they are, it could increase safety and efficiency and probably reduce our costs.”

Adam Houston, associate professor of atmospheric science at the University of Nebraska-Lincoln, has been working with Frew and his team for more than 10 years. He’s interested in using drones and drone swarms to observe the atmosphere and ultimately improve severe weather forecasting. Through a National Robotics Initiative project that Frew leads, the universities are investigating how drones can enhance atmospheric modeling. One of the goals is to determine the best location to fly UAS, either in or near the supercell thunderstorms that have the potential to produce tornados, to collect the data necessary to improve these models and ultimately forecasting.

Studying the environment in and around tornados with a flock of drones will help forecasters understand spatially what is happening, Frew said, giving them multiple measurements at the same time at different locations.

“The more aircraft you have the more data you can get and the more area you can cover—and therefore the more likely you are to improve predictions of these storms,” Houston said. “Flying a bunch of aircraft is one thing, but flying in a coordinated way is essential. You need to be able to fly a footprint in the path of the storm or in the storm that most optimally covers the region that needs to be sampled to improve forecasting. Having some internal intelligence and coordination is important to maximizing that coverage.”

The UAS collect the same data as the weather balloons and the weather stations the National Weather Service uses today—including temperature, moisture and wind pressure—but the difference is where that information is gathered, Houston said. Drones can get to areas traditional methods can’t reach, collecting data in parts of the atmosphere that were off limits before.

“They can operate in close proximity to the storm and in a targeted fashion,” Houston said. “If we had a storm in North Dakota, we could send aircraft to that storm and collect the data that would be used to improve the prediction, without having to rely on a fixed set of observation platforms.”

The team is focusing on how the drone-based data can be inserted into numerical prediction models, Houston said. The improved data would enable the models to better simulate the intensity and the path of the storm—making their predictions more meaningful.

While Houston and his team have completed UAS missions in and near storms and have spent many hours conducting other related research, they haven’t tested the new swarming technology just yet, Houston said. They hope to do so soon, but there are funding and regulatory challenges to overcome. Eventually, he’d like to see UAS surveil the atmosphere on a regular, even continual, basis to improve the models used for forecasting. Images and videos the drones collect also can be beneficial, with members of the National Weather Service who Houston surveyed indicating that having access to detailed, high-resolution imagery would give them even more insight into severe storms and their behaviors. 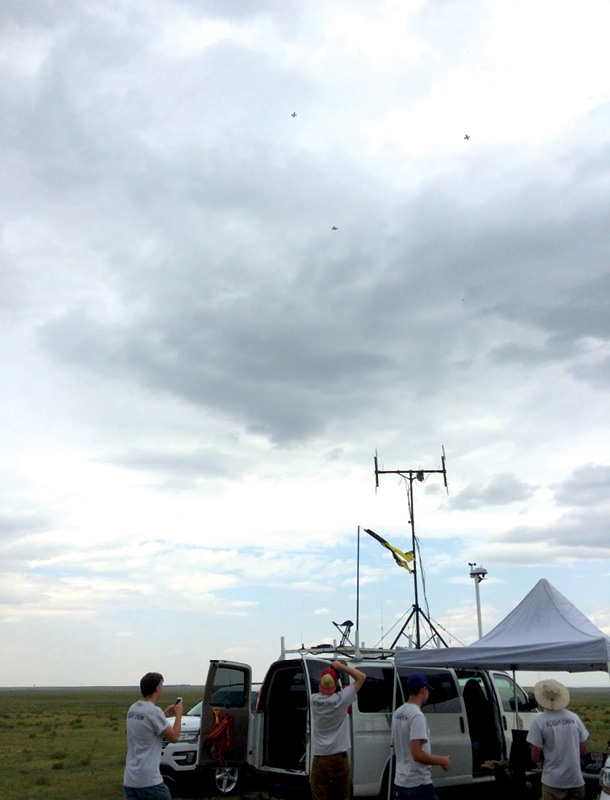 The fact multiple drones can work together to quickly cover more ground is a significant benefit that drone swarms offer—especially in search and rescue situations—but there are other reasons to consider deploying swarms, Frew said. Swarms are more robust against a single failure, for example, so if one sensor stops working or one of the collaborating drones is somehow damaged, there’s a good chance the operator will be able to complete the mission with the remaining UAS. That isn’t the case if the sole drone deployed for a mission goes down, or if one of its sensors is on the fritz.

Another benefit is cost savings, Frew said. These don’t have to be expensive UAS. Operators can invest in three or four systems that cost about $1,000 each that, when flown together, have the same capabilities as one larger system that costs between $5,000 and $10,000. The fact the systems are smaller and lighter also makes them easier to transport and deploy.

The technology also offers a versatile solution, Frew said. He typically relies on fixed-wing aircraft for most of his research for a variety of reasons, including their longer endurance and flight range, but said the swarm algorithm could be used on any platform, including quadrotors, depending on what’s best for the mission.

The swarming algorithm they’ve created at CU Boulder is a developing technology, and the team is always looking for ways to enhance it, Frew said. One way is through cloud computing, which Frew envisions using one day to interface with drones in real time.

If the drones are collecting information from a storm, for example, a meteorologist could be running storm simulation forecast models simultaneously and using the drones’ measurement data to determine which model most closely matches what they’re observing. Regardless of the application, operators can’t run these models on the aircraft, but other team members can run them back in the lab and allow the drones to access them as they’re flying. The team is also looking at eventually operating the aircraft via the cloud.

Researchers will continue to test the technology and make improvements along the way, Frew said, which includes even more robust communication for enhanced collaboration.

“It’s very easy to come up with an algorithm in the lab that can share information and make sophisticated decisions, but when you put it on a real life aircraft you realize how much gets lost over the communications links,” Frew said, describing one of the main challenges to developing this technology. “If I deploy a team of drones to find a lost hiker and they localize that hiker, they haven’t done their job if they haven’t given that information to the search and rescue group that can save that hiker. The information has to get back to the right person at the right place at the right time.” 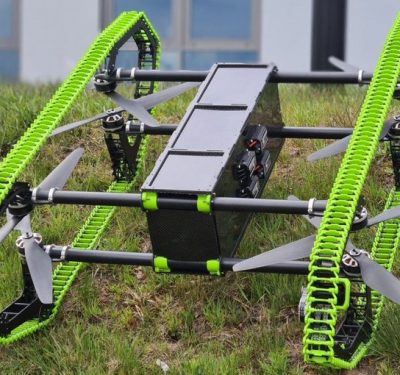 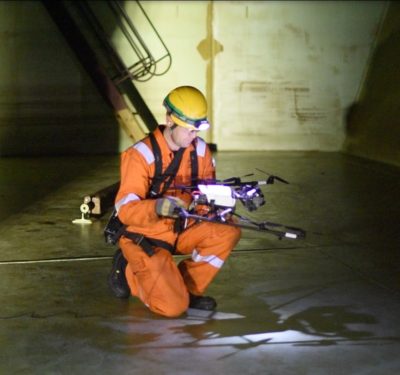 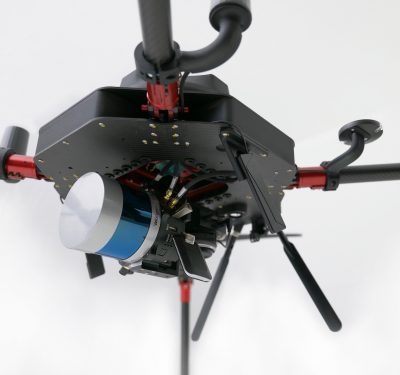 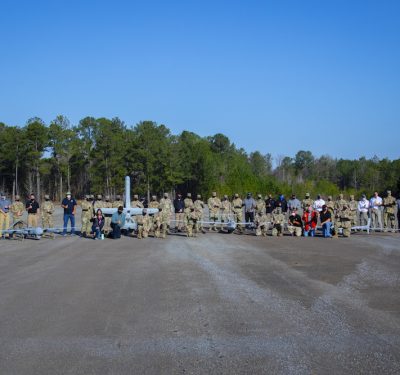