A lot has changed for the commercial unmanned aircraft system (UAS) industry in just a few short years.

Big players are entering the market while smaller companies are bowing out. Strategic partnerships are becoming the norm as manufacturers and service providers aim to position themselves as complete solutions. Technology continues to advance as regulations take shape, all while businesses in a variety of verticals work to determine the best way to incorporate UAS into operations.

“As an industry that truly only started in earnest about 5-6 years ago, it has seen rapid growth and change over the past few years,” said Pam Cohn, a consultant for McKinsey & Company. “It has matured rapidly from a small, fragmented group of small players with interesting technology and big ideas, to a large, sophisticated ecosystem of large traditional aviation players, the tech giants of Silicon Valley, and a robust landscape of tech, services, and hardware startups.”

A large influx of venture capital helped propel the industry forward and establish new companies, but at the same time, large organizations like Intel entered the market—leaving a lot of players to chase a limited amount of business, said Philip Finnegan, Director of Corporate Analysis for the Teal Group. That led to the consolidation the industry has seen over the last few years.

“Consolidation was necessary because as interest grew, there was a proliferation of drone solution providers who weren’t making any money,” said Rian Whitton, an analyst with ABI Research. “We’re now seeing the smaller, less successful vendors being eked out.”

While acquisitions and mergers were initially a large part of the consolidation, those have slowed down over the last year, said Kay Wackwitz, CEO and founder of Drone Industry Insights. The bigger players are focusing on forming strategic partnerships instead.

“People realize the stand alone version of whatever they’re doing, whether it’s software or hardware, will not be sustainable,” Wackwitz said. “You now have solutions that include hardware, software and service in one package, bringing their value way up.”

As companies look to implement drones into operations, they have two options: develop a program internally or hire a service provider. Wackwitz sees room for both models, as well as more companies offering leasing options for customers that can’t afford to invest in a drone.

“If you want to scale drones up and if your aim is to not make drones cheaper but to make them better with longer range and to be more capable, it will be harder to sell them, especially to smaller providers,” Whitton said. “Instead, you can lease them out as part of a service or people can pay for a subscription. In some cases they might not even be leasing the drone, but just subscribing to the data through a data sharing service.”

Because it’s getting easier to incorporate drones, many organizations will likely opt to fly missions themselves, Wackwitz said. The data collected via drone is often sensitive, and many companies prefer not to put it in the hands of a third party. 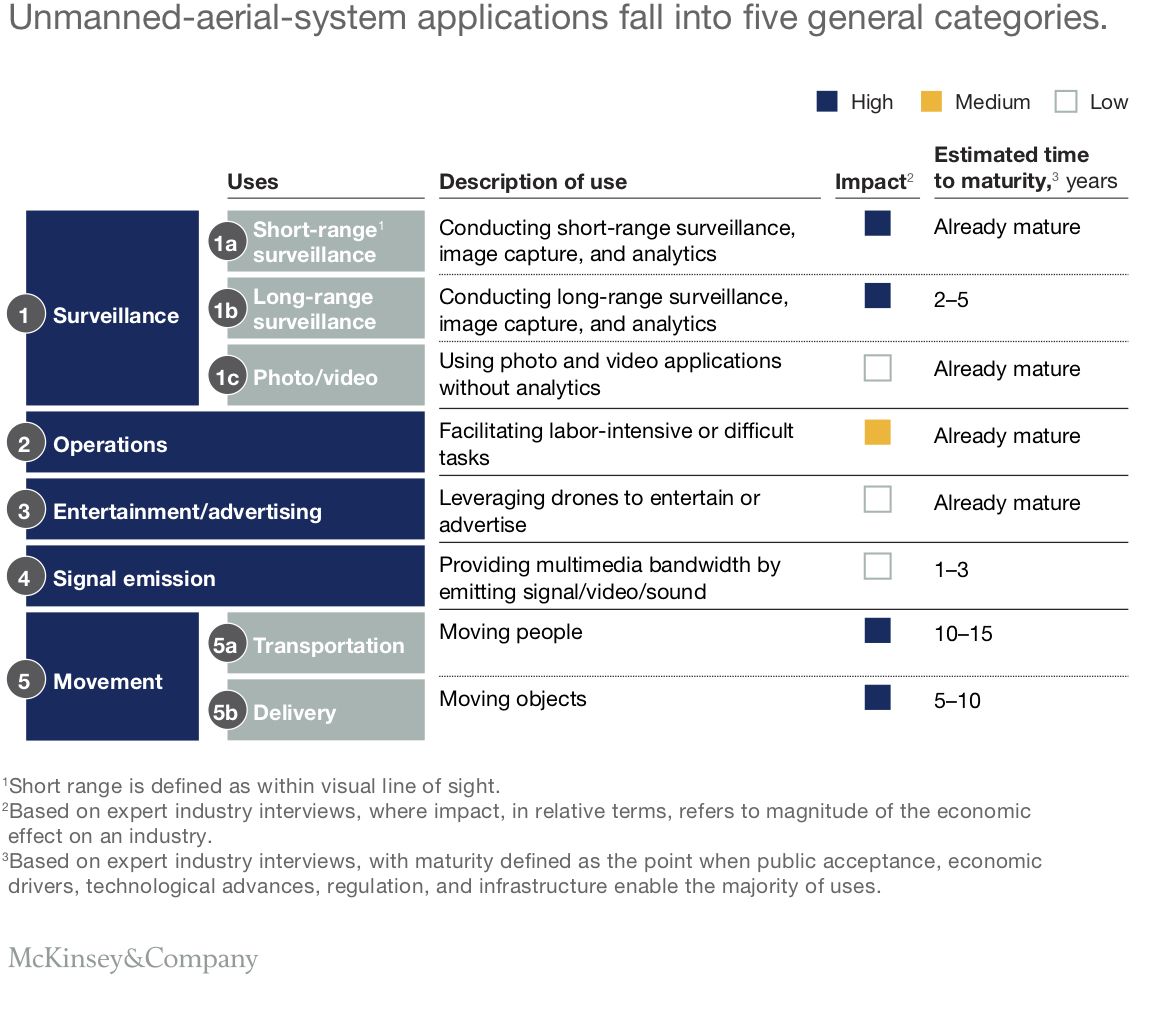 Today, drone users are engaged in pilot programs to determine feasibility and economic benefits, Finnegan said, with corporations serving as the early adopters that drive the market. This is already happening in some industries, including construction and oil and gas, where drones are deployed for monitoring and inspection.

“The most popular applications are those that fit easily within the current regulatory regime,” Cohn said. “However, in the long term, once regulatory maturity is achieved, the true winners will have a strong economic case at their core. They will either materially benefit the bottom line or risk profiles for organizations that adopt them, or provide access to robust new consumer segments, such as transportation services that significantly reduce commute times in major cities.”

Insurance, film and media are among the areas where UAS are taking off, but there is one industry where drones haven’t reached their anticipated growth: agriculture.

While drones can collect imagery and data about crop health, there isn’t a way for farmers to take immediate action on that data, Wackwitz said, making traditional collection methods more attractive. 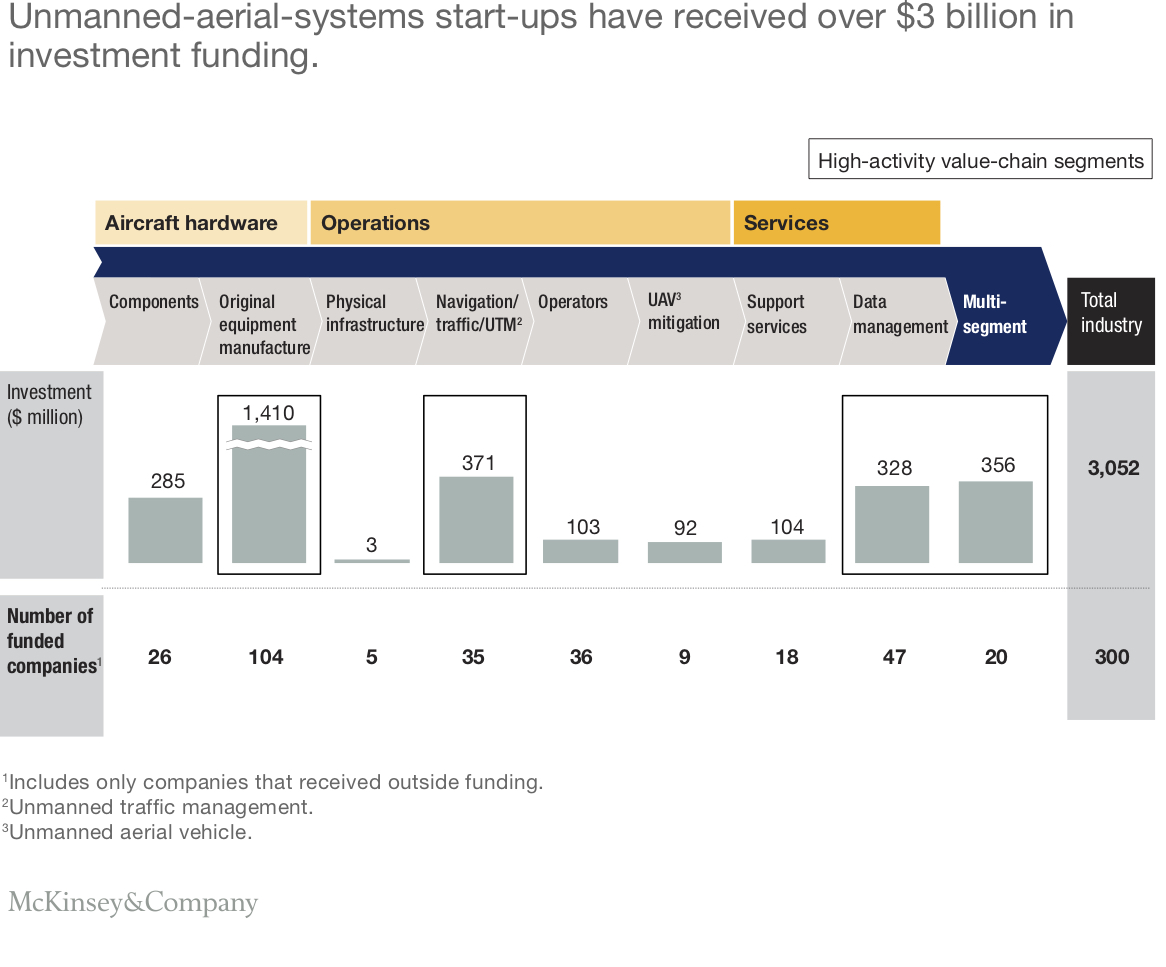 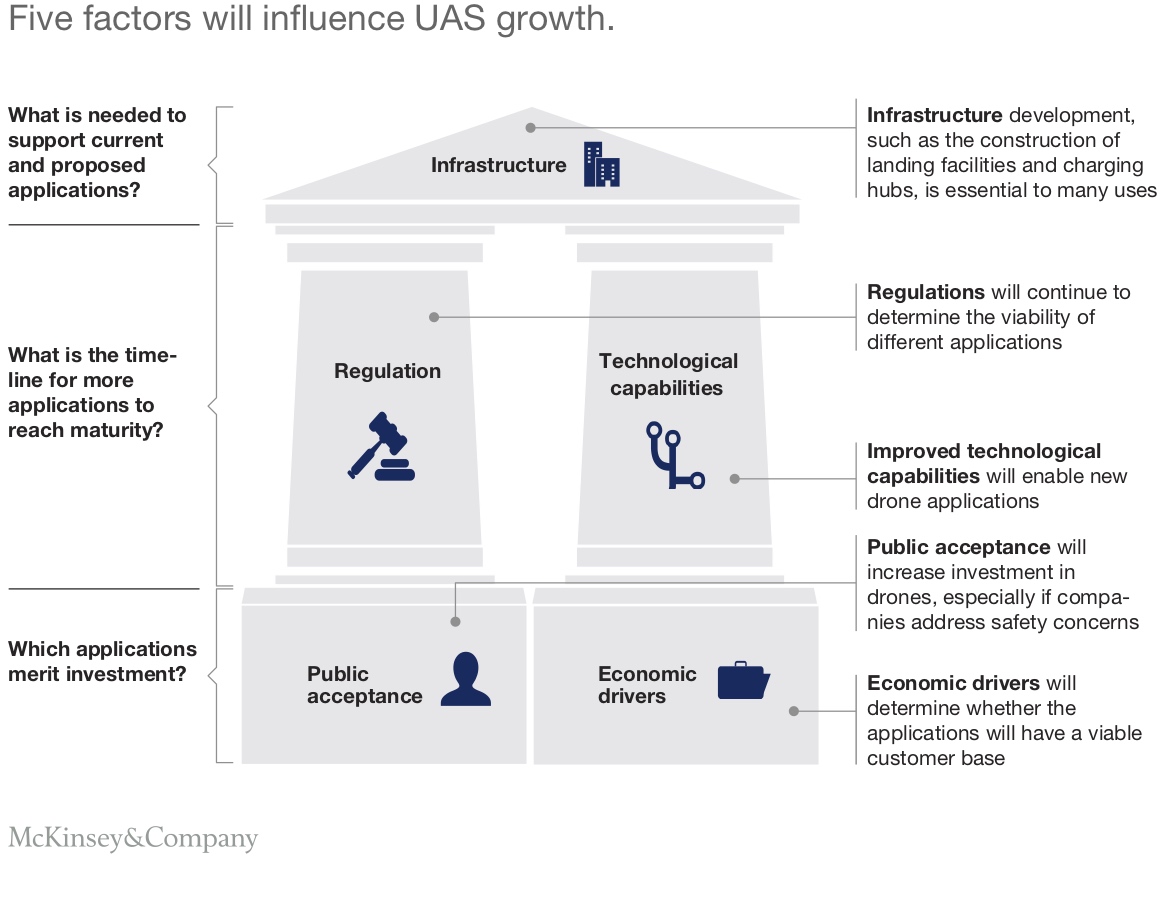 Where it was once all about the physical hardware, the market is now shifting its attention to software solutions that enable flight autonomy, data processing, and unmanned traffic management (UTM) solutions, Cohn said.

As software has become more sophisticated, the sensors navigating the drones and collecting data have become more accurate, Whitton said. Manufacturers are also looking to other options to power drones, such as hydrogen fuel cell systems, to give them the longer flight times users need to seamlessly complete missions.

The significant reduction in size and price for LiDAR has mainly been fueled by autonomous driving, Wackwitz said, and has increased adoption in the UAS market. There are various solutions available to help with navigation, and a “shake down” has begun in that area as well. Redundancy is also important, especially as the industry moves to beyond visual line of sight (BVLOS) operations.

Before drones can routinely take on more complex use cases, such as BVLOS inspections, urban transportation and delivery, there are a variety of technical challenges the industry still must overcome, Cohn said, including developing a UTM system, increasing flight distances and automating the vehicles.

Regulations are another key factor, Finnegan said. For drones to be viable in many industries, they’ll need to fly BVLOS. Other applications are only possible if UAS can fly over people. Neither are allowed under Part 107 regulations.

The technology is changing quickly, making commercial drones a difficult industry to regulate, Wackwitz said. Creating standards across state and country boarders represents an even bigger challenge, but is one that must be solved to truly scale business models. This is especially important for the much anticipated drone delivery services.

“You need certain standards for how drones are produced, standards on redundancy when it comes to hardware and software, standards in workflow and even how to integrate drone acquired data. That’s something no one really talks about,” Wackwitz said. “Who’s going to do it? You need a player who has the power to set a new standard.”

Then of course there’s establishing trust, Wackwitz said. The public needs to understand why drones are deployed, while business leaders must be able to trust the data collected and be confident drone itself won’t be hacked during flight.

To be more commonly adopted, it’s critical for drones to prove their cost effectiveness, Finnegan said.

“They’re still in the process of doing that in some industries and in others they already have,” he said. “Corporate decision makers need to feel comfortable they will actually save money and won’t be exposing themselves to a lot of risk and liability if they use these systems.”

While there’s still a long way to go, great progress has been made. Key stakeholders are realizing the value drones can offer a variety of verticals. The industry is no longer “overhyping” their capabilities, Whitton said, and people are more realistic about what drones can achieve, and how long it might take for the regulations to catch up with the technology.

As the industry evolves, systems will improve and regulations will take shape. UTM, (what Whitton describes as the Holy Grail for the industry) and other “turn-key technologies,” such as GPS-denied and detect-and-avoid solutions, will receive more attention and investment—all while potential users try to figure out how UAS fit into operations.

“As a whole, the industry has increased its sophistication and approach to key issues like regulation, technological timelines, and monetization strategies,” Cohn said. “Companies are becoming increasingly intentional about their decisions of where to play in the value chain, what strategic partnerships they can foster with other organizations throughout the private and public sectors, and what it will take to achieve their visions of the future of unmanned.” 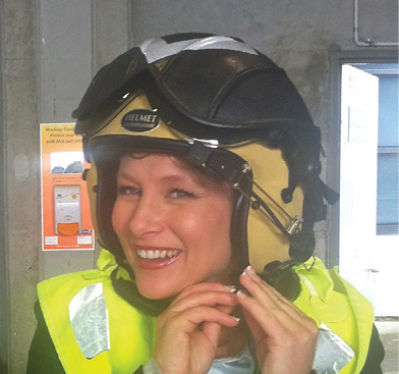 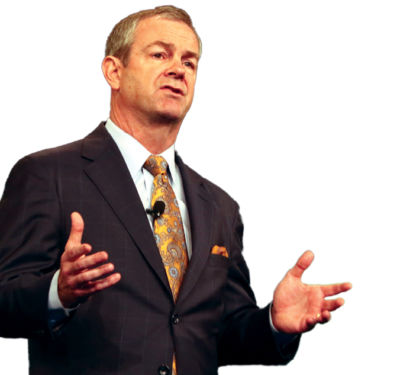 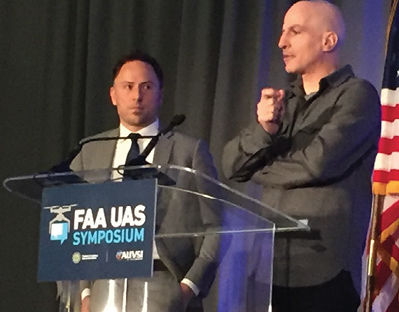