That is the question—whether ‘tis nobler to let swarms of small, inexpensive drones suffer the slings and arrows of enemy air defenses, or should the Air Force continue to do it the old-fashioned way with a handful of larger, more expensive drones?

The Air Force has been talking for some time about creating swarms of hundreds of drones that will decide amongst themselves how to fly to a target and then coordinate various operations such as finding targets, striking them or engaging in electronic combat. The premise is that hundreds of cooperative drones will quickly overwhelm enemy air defenses and create mayhem without a great deal of human intervention.

I’ve been skeptical about swarming because it violates my two drone rules.

As faithful readers know, those rules are: 1) it’s the data link, stupid, and 2) they are still aircraft. Nearly every drone operations debate I had in the Pentagon began with either shouting over the limitations of data links or cursing at the cost of them. Either way, it always ended the same: no link, no drone. Conversations about future drone missions almost always involved bending physics for drones to allow them to do things that manned aircraft could not. Generals would demand drones that could somehow fly 5,000 miles carrying 8,000 pounds of ordinance, be reliable enough to fly for 500,000 hours lifetime and yet cost 10% of an F-16 that could not do any of that.

I admit, I am confused by the myriad of Air Force and DARPA experimental drone programs, and I had thought many of them would result in swarming drones. I thought wrong (mostly). The Air Force decided that it IS too difficult with current tech to put hundreds of swarming drones over enemy territory and then recover them. But they are creating the building blocks that may allow them to swarm in force.

Toward this goal, the Air Force Skyborg will develop an autonomy core system. A stealthy drone “loyal wingman” to fly alongside manned fighters might be the first application of Skyborg autonomy, whereas the Low Cost Attritable Aircraft Technology (LCAAT) effort will use autonomy in a non-stealthy drone that is cheap enough to lose some to enemy air defenses. DARPA’s Project Gremlin launches and recovers autonomous small drones from Air Force cargo aircraft. Golden Horde is a one-way swarming autonomous drone program that aims to overwhelm enemy air defenses with targets. 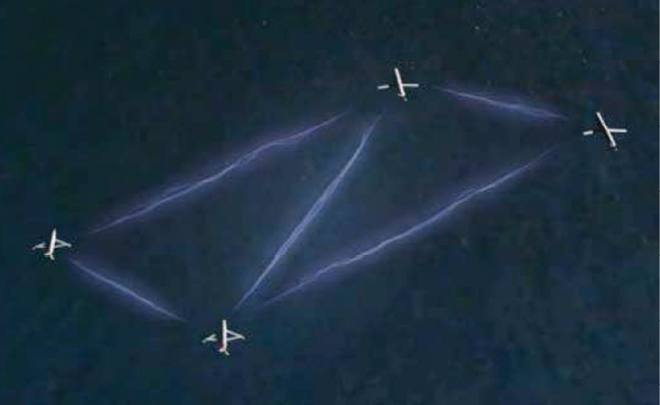 With so many ambitious drone programs being considered, I expected a see a lot of wishful thinking from the Air Force about what physics would allow drones to do and how these drones would process data given the current state of drone data links. Instead, I found that the Air Force had a great appreciation for what drones could and could not do.

The Air Force wants to start with tech common for all drones that can give them a wide range of capabilities, and then work toward specific unmanned missions. The service plans to design 21st-century drones around autonomous systems. This makes the Skyborg program very important because it will produce a next-generation autonomy core system they can adapt to a variety of mission types and platforms.

The autonomy core system will be the “nerve system” of future drones, hosting the software and hardware drones need to do relatively simple tasks autonomously. If successful, the system may host the autonomous air combat operations system (AACO), with its AI tools, apps and skills that will allow drones to do complex combat tasks, such as air to air combat. I recommend watching DARPA’s AlphaDogfight trials on YouTube to see what AI can do. The winning AI beats an F-16 Weapons School graduate five times in a row. Believe it or not, the AI didn’t even know how to fly, let alone dogfight, when it started the trials.

The first application of Skyborg autonomy core system might be for the Loyal Wingman program to create a drone wingman that will fly alongside fifth-gen fighters like the F-22 and F-35. It may also fly as “adversary air” to simulate enemy aircraft to train fighter pilots. The Loyal Wingman will be a relatively large, fast, fairly stealthy drone that doesn’t require bending physics to stay up with the F-35 and fly into the teeth of enemy air defenses. This will be a relatively expensive drone and will not swarm to its target. Because a stealthy drone cannot have an easily detected data link, Loyal Wingman will let the autonomy core system do most of the flying and will only require short commands from partner manned aircraft. Think “shoot that target,” “scan that sector” in place of commands like “deflect rudder 10 degrees port, increase throttle 5%” that many current drones need from their remote pilots.

An artist’s conception of DARPA’s X-61 Gremlin recoverable drone, which is a candidate for limiting swarming.

DRONES YOU CAN LOSE

LCAAT will be the cheaper, less stealthy brother of the Loyal Wingman. It will fly at the outer edge of enemy defense rather than inside them. It will use a similar autonomy core system to reduce dependency on high-capacity links. Like the Loyal Wingman, LCAAT will not need a physics waiver to fly far and stay for a long time; it will be a relatively large drone and probably will not swarm in large numbers.

The problem with LCAAT is not AI—it is production. Can the Air Force field a reliable, long range drone that is cheap enough to be attritable? Can it deploy sensors that are good enough to find targets at long range yet cheap enough to lose occasionally? Hopefully, with new digital design techniques and advanced manufacturing, LCAAT will be cheaper than the venerable MQ-9s it will replace.

DARPA’s Project Gremlin addresses affordability by bringing the drone closer to target to launch and recover it via cargo aircraft. Airborne recovery near enemy airspace means Gremlins can be much smaller than LCAATs or Loyal Wingmen. They also do not need heavy landing gear, making them cheaper to produce. Again, the Gremlin relies heavily on autonomy to reduce dependency on high-capacity data links.

Gremlin’s small size, low cost and autonomy make it a likely candidate for limited swarming deep inside enemy airspace—think of a formation of 10 Gremlins, each with a different payload, all cooperating with each other. Several would have sensors to find targets, some would have jammers to protect the formation and others would have weapons to strike targets found by other Gremlins. Do not, however, envision hundreds of Gremlins swarming. That would take too many cargo aircraft and make the airspace dangerously crowded during launch and recovery. Leading to my next point…

My concerns with Gremlins involve the wartime availability of cargo aircraft and safety concerns of airborne drone recovery. These designers forget that during wartime cargo aircraft are often in more demand than bombers. Would future Air Force combat planners be willing to give up supplies and parts for their whole fleet in return for launching a few more drones? More importantly, will Gremlins survive their first aerial recovery accident? Something tells me Air Force safety will have a dim view of aircraft landing inside other aircraft in flight.

Golden Horde is the only program that will swarm drones in large numbers, but it is a one-way system. Golden Horde envisions dozens of modified existing weapons such as the GBU-39 Small Diameter Bomb flying in formation far into enemy defenses using a short-range data link to communicate within the formation, find targets and coordinate strikes. Golden Horde swarms will not need to bend physics to strike long distances because none of these drones plan on coming home. Because the drones will only have to communicate within the swarm and will have autonomous systems, Golden Horde swarms will not need high-capacity data links like today’s drones.

In the end, I was sorta right about the Air Force working on swarming drones. They do plan to swarm someday but they are maturing the capabilities in a very calculated manner—i.e., don’t expect a swarm of expensive stealth drones flying from thousands of miles away to their target. Do expect a swarm of modified long-range weapons using autonomous systems to fly hundreds of miles to overwhelm enemy air defenses. Even with the large number of Air Force and DARPA drone programs, I was impressed by the thought behind all of them and the collaboration between each concept. I think even Hamlet could make up his mind and survive with this decision-making process.

One last thing to my Air Force swarm designer friends: please read my article about micro Mode V transponders at insideunmannedsystems.com/is-that-our-dot/. The last thing we need is our swarms getting confused with enemy swarms. Consider options such as the uAvionix ZPX-B, which, at 53 grams, is about the size of a deck of cards. It won’t break the SWAP bank and it will prevent a lot of confusion on the battlefield! 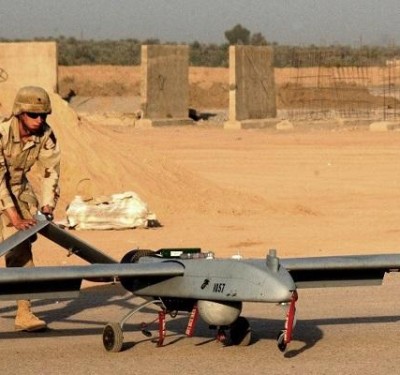 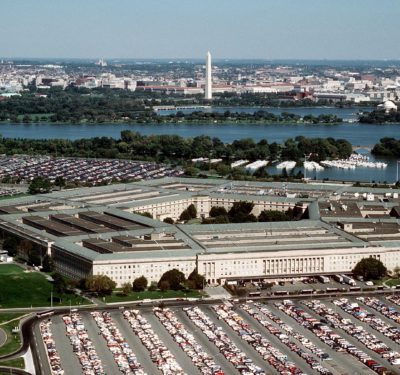 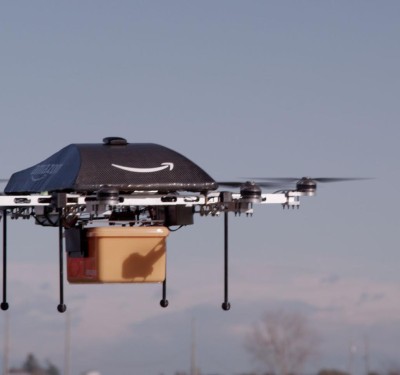 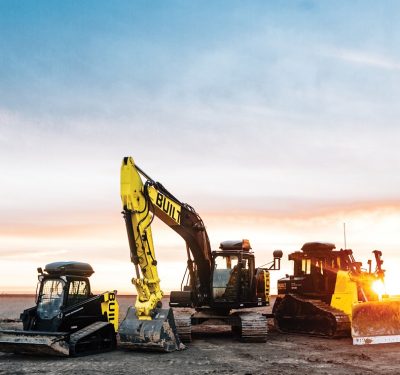