When it comes to paving roads, mistakenly adding a quarter-inch of extra material over 10 miles can boost the final bill by a quarter-million dollars. To avoid such mistakes managers are increasingly seeking to improve the overall precision and accuracy of construction projects with automated machine guidance, or AMG.

AMG links construction equipment with onboard computers that use data from 3-D models and GPS to guide operations—saving time and money as well as improving safety and quality. Now the Oregon Department of Transportation, or ODOT, is exploring adding unmanned aircraft to help survey areas for construction efforts.

“It’s emerging as a good tool for us in surveying,” said Ron Singh, who is chief of surveys at ODOT.

ODOT is starting out its unmanned aircraft program with a Aibotix Aibot X6 Hexacopter, which can fly programmed flight paths autonomously and carry 4.4 pounds of cameras and sensors.

“We’re using traditional RGB cameras at this point, but it’s capable of lifting a small LiDAR sensor,” said Singh, who also manages all emerging uses of unmanned aircraft systems across ODOT. “Aibotix is working on adapting a LiDAR sensor for this particular hexacopter.”

The drone navigates using GPS RTK (Real Time Kinematic) technology, and is designed to be controlled by a robotic total station. Singh and his colleagues are using the drone to generate 3-D maps from orthorectified imagery that accounts for topographical variations in the surface of the Earth and the tilt of the drone. Specifically, they produce digital terrain models via structure-from-motion technologies that estimate 3-D structures from multiple, overlapping 2-D images.

“From my perspective, a drone is like a tripod for surveying, only you can place it 200 feet in the air over a particular spot,” Singh said. “It’s a less expensive and quicker way of moving a sensor to the right position compared to a boom truck or a fixed-wing flight, and in many ways safer—we don’t have to have crews rappel down bridges, but instead just fly a drone into a position where it can capture some data.”

Singh and his team are used to producing digital terrain models from high-altitude aerial imagery, but “we are finding anomalies that come from the use of a drone being so close to the ground, and we are learning to change our methodologies to correct for that,” he said. 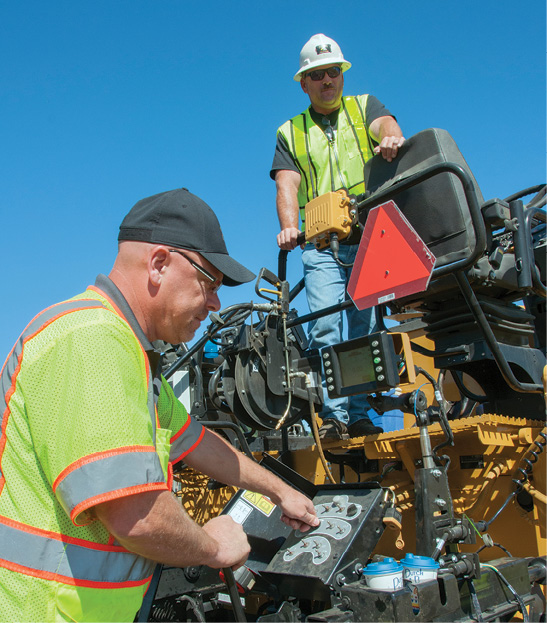 “Some of the anomalies come because we’re using structure-from-motion technologies,” Singh said. “For example, let’s say we’re producing a digital terrain model purely from imagery. If we have things like a vertical wall, and the imagery is coming primarily from a camera pointed straight down in the nadir position, then we find that the wall looks wavy. However, if we include some oblique images—if, for part of the flight mission, we turn the camera so it flies along that wall to produce more images of it—then we create a surface model of that wall that is much more correct, that is crisp and sharp.”

Another set of anomalies comes from tall grass and bushes.

“If we have a bare piece of ground such as a quarry site, where there is no grass growing that is tall, then using structure-from-motion technologies, you can get a fairly exact model with a couple of centimeters of vertical accuracy and a 95 percent confidence level,” Singh said. “However, you may have grass, say, 8 inches high, and you can’t see the ground, so the accuracy of the surface model will be off. Still, if we move to LiDAR and the grass is sparse enough so that the LiDAR can see through the grass to hit the ground, we may get better models.”

The attraction drones hold for Singh is rooted in part in his experience in flight. His father was a fighter pilot in the Indian Air Force and Singh began flying when he was 14 in gliders pulled down airfields by cables on winches, aircraft that could soar aloft on thermals in Bangalore for long spans of time. Singh is now a private pilot who keeps a hangar behind his house—he built a Rans S12XL Airaile kit plane that he has piloted for 16 years and flew in air shows for eight years alongside other homebuilt planes—and he is currently building a Van’s RV12 light sport aircraft.

“My flying has always helped me with my survey work at ODOT, since I had to deal with aerial imagery,” Singh said. “Now that I’m managing the unmanned aircraft program for ODOT, it helps a lot that I already had good connections with the local FAA people.”

“If I had not been a pilot, I would not have been as informed about what all the regulations are, and those are the biggest issues with drone work; if I had not been a surveyor, I’d have difficulty really knowing all the things you can and cannot do with drones in surveying,” Singh said. “Also, as a pilot, I don’t want to be hit by a drone when I’m flying, and I want to make sure my people understand that—I’m trying to get drone pilots to recognize that drone flying is a serious business.”

All in all, drone missions are part of “the quest for 3-D everything,” Singh said. “We’re trying to move from the 2-D design and construction world to a full 3-D world. We want drones to help survey terrain in 3-D, and design on a 3-D map that includes all the underground utilities on a site such as drainage and power lines as well as features on the ground such as trees and walls.” 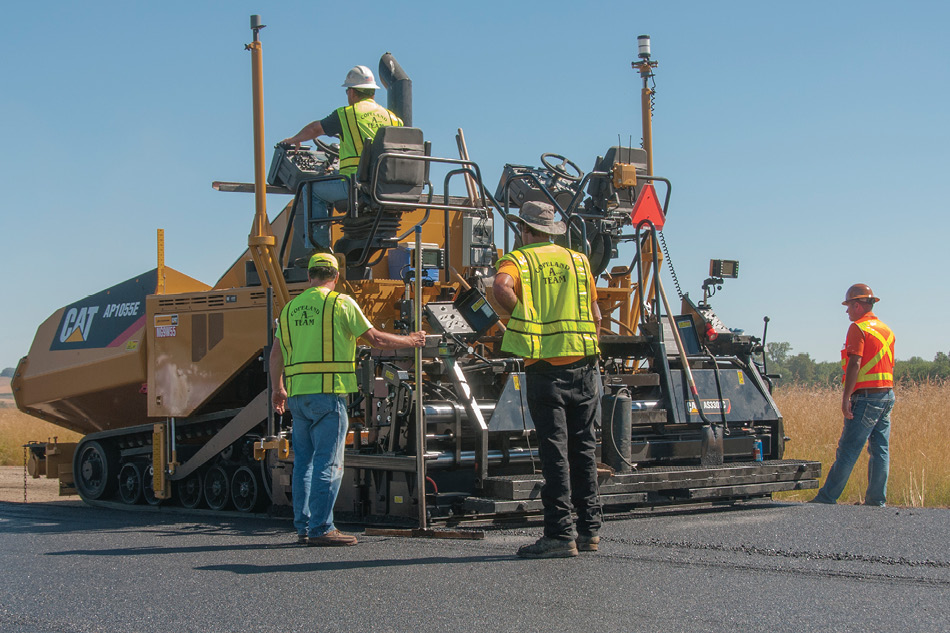 “Almost any piece of heavy construction equipment can be automated, and in the long run, that’s what we expect,” said Singh, who also directs ODOT’s engineering automation program.

“When a road wears or fails sooner than expected, our studies have shown that 70 percent of the reason for that failure was workmanship,” Singh said. “It’s not material, as in you got bad concrete or gravel or asphalt, but workmanship—maybe the material was laid down too thin. With automated machine guidance, you can build better roads, as well as curbs, sidewalks, walls and traffic islands. If you want a 6-inch-thick slab of concrete, you get it.”

“Let’s say you want a concrete roadbed for a section of freeway,” Singh said. “All in all, concrete paving can get to within probably 2 to 3 millimeters of vertical accuracy. You’ll have a milling operation grinding up the old road, picking up material and putting it away in a dump truck and hauling it off. That can be automated; can be controlled by a total station or GPS. Then maybe behind it you’ll have a concrete paving operation. That can be one big machine laying down a concrete roadbed maybe 10 or 12 inches thick, and that’s got people on it, but they’re managing the computers, not actually driving the machine. A few feet behind that machine you’ll have another one finishing that rough concrete slab, and that will be controlled by total stations or GPS.”

AMG is now dramatically improving construction projects in Oregon. “One contractor, K&E Excavating, has invested heavily in AMG,” Singh said. “In 2010, they were only getting a few projects from ODOT, but now they’re getting almost every project there is because they can get their bids lower. They’re coming up with bids lower than our engineers’ estimates.”

“For instance, when it came to a project to rebuild an interchange on the interstate that was designed to be three years long, K&E managed to shorten it by one year down to two years,” Singh said. “So that’s less time and money, and less disruption to traffic, and one less year on a site where all sorts of traffic is trying to maneuver through a work zone, so the reduction of risk of accidents is huge. We find that contractors that use AMG are getting jobs while others are not, and the others are scrambling to catch up.”

“In my experience, Ron’s approach toward automated machine guidance and drones is very unique in the world of departments of transportation—it’s the most progressive I’ve seen,” said Paul McDaniel, owner of Advanced Geodetic Applications, Lyons, Colorado. “Whereas most of the departments of transportation that I’m familiar with have taken the stance that this technology is an oncoming freight train that they can do nothing to stop, his approach is to embrace it, that this is technology that can be useful if we learn what its capabilities really are. I’ve found that to be a very refreshing approach. If you don’t understand how this technology works, you leave yourself open to manufacturers and contractors taking advantage of you.” 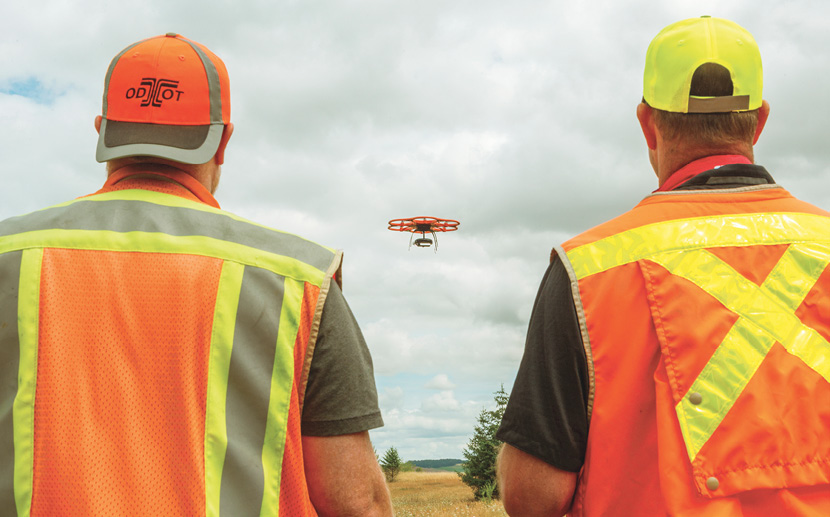 Oregon’s tax and funding allocation structure means that ODOT “is better funded, and more dependably so, than a lot of other departments of transportation are,” McDaniel said. “With that said, Ron has made very good use of the resources at his disposal, accomplishing the most with the least, whether that’s dollars or manpower. Ron has tried to stay ahead of the curve when it comes to technology, and most governmental organizations I know of, whether local, state or federal, have let the curve get ahead of them.”

Federal regulations still pose significant hurdles to what Singh would like to achieve with drones.

“We cannot fly drones over people, so if we’re doing a project and we’re mapping the highway system, we do work out in remote areas, and in areas where the traffic volumes allow us to,” Singh said.

The level of accuracy Singh can currently achieve with drones also limits what construction projects he would like to do with them.

Construction projects that required only drones might include quarry sites, Singh said. “Drones can also be used in progress reporting—for instance, when you’re paying a contractor for moving earth, you pay for how much soil and rock they brought in, and you can use drones to look at that,” he said. “Drones can also record images every week or every day just to have a record of what is happening for safety compliance and other things.”

One major project of Singh’s that he foresees drones could help with is the Virtual Transportation Corridor System.

“The goal is to take our entire state highway system, roughly 9,000 miles of road, and develop a digital representation of it in 3-D, with all our GIS information,” Singh said. “The idea is that anyone in our agency, from the director to a maintenance person who needs to mow the grass in a median area, can look at this on a Web-based interface and zoom in on the map, and see anything they needed to make a decision—such as accident history, roadbed friction, guardrails, culverts, signs, traffic lights, vertical clearance—and flip on street view with 360-degree imagery if they wanted, just like Google Street View, or drop in 3-D models into the system as we are building projects.”

“We’re in the process of collecting all this data with survey-grade devices—we’ve done more than half the state so far,” Singh said. “Drones could absolutely help us build the Virtual Transportation Corridor System. We’ll use them where regulations allow us to, and where the use of fixed-wing airborne surveys would be too expensive or take too long. They’ll help us get to our goal quicker.” 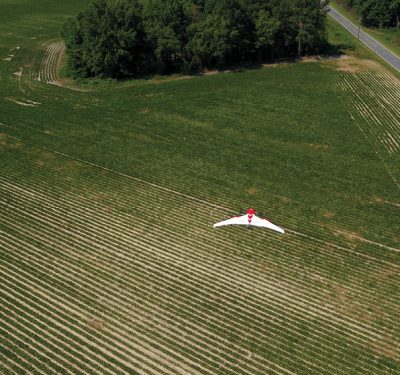