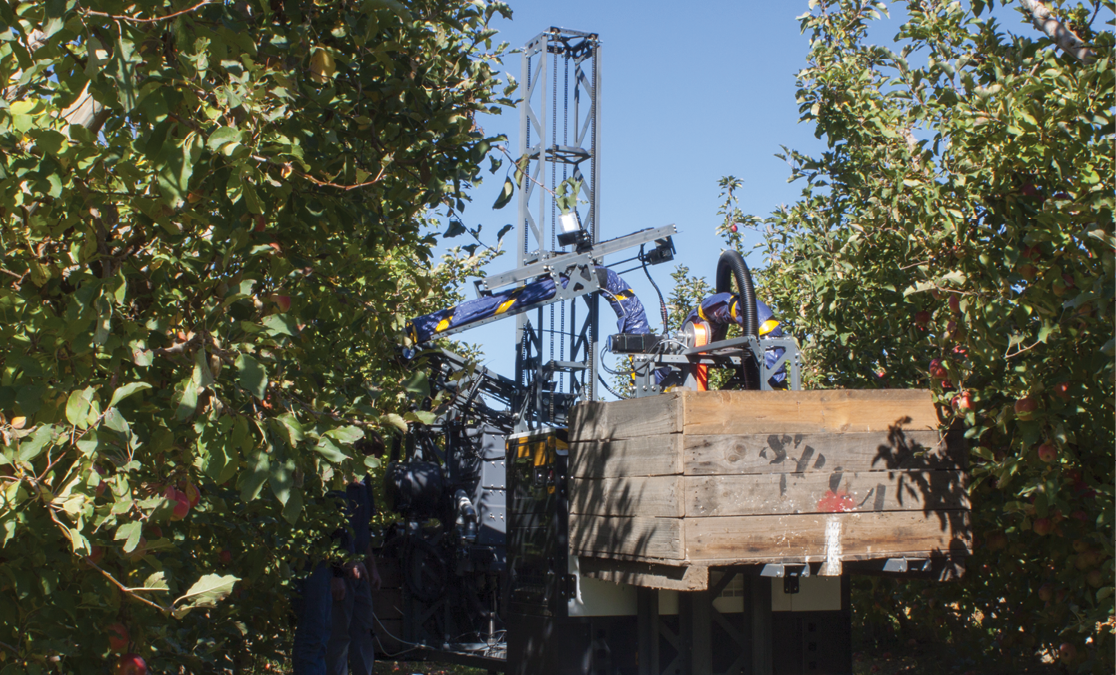 Innovative developers are exploiting enormous opportunities in the sphere of agricultural automation and unmanned autonomy. In addition to robotic machines, today’s farming is supported by new developments in data analytics systems. Unmanned drones scan fields and crops, and permanent sensors estimate yields, measure flower counts and detect disease. All this means farmers can produce more food with fewer inputs in land, water and other resources.

Activity in multiple countries show the ball is rolling and prizes are there for the taking.

In Victoria, Australia, the Ripe Robotics team believes there is a place for autonomous machines to handle fine, discriminatory jobs such as picking fruit. The company is running trials with its latestgeneration robot, called Eve, picking apples, oranges and plums. It aims to deploy Eve for commercial-scale harvesting this year.

“Eve uses a custom-designed, suction end-effector to remove fruit from trees with minimal damage,” Ripe Robotics Chief Customer Officer Leopold Lucas said. “This is a highly technical solution with minimal moving parts, and it’s connected to the cloud so operators can easily track its progress from remote locations. The system uses modified vision algorithms and, with advanced artificial intelligence and deep learning, we train the model to identify fruit location and ripeness.” Once that’s done, the robot moves to the desired location, where it picks the fruit and gently places it in a bin. Currently, a human monitors its activities for any indecision even as Eve builds its task memory.

“Our customers are fruit growers who have difficulties with labor shortages and damaged fruit,” Lucas continued. “Many of the gripper-based systems that have been studied in the past have issues with bruising, which devalues the fruit significantly. They also can rip branches, which causes problems with later harvests. Our suction-based system is more reliable and it has fewer touch points, making damage less likely. The key performance indicators are speed of picking, quality of picking and reliability of the machine. We’re aiming to have something that is better than a human picker in every way.” 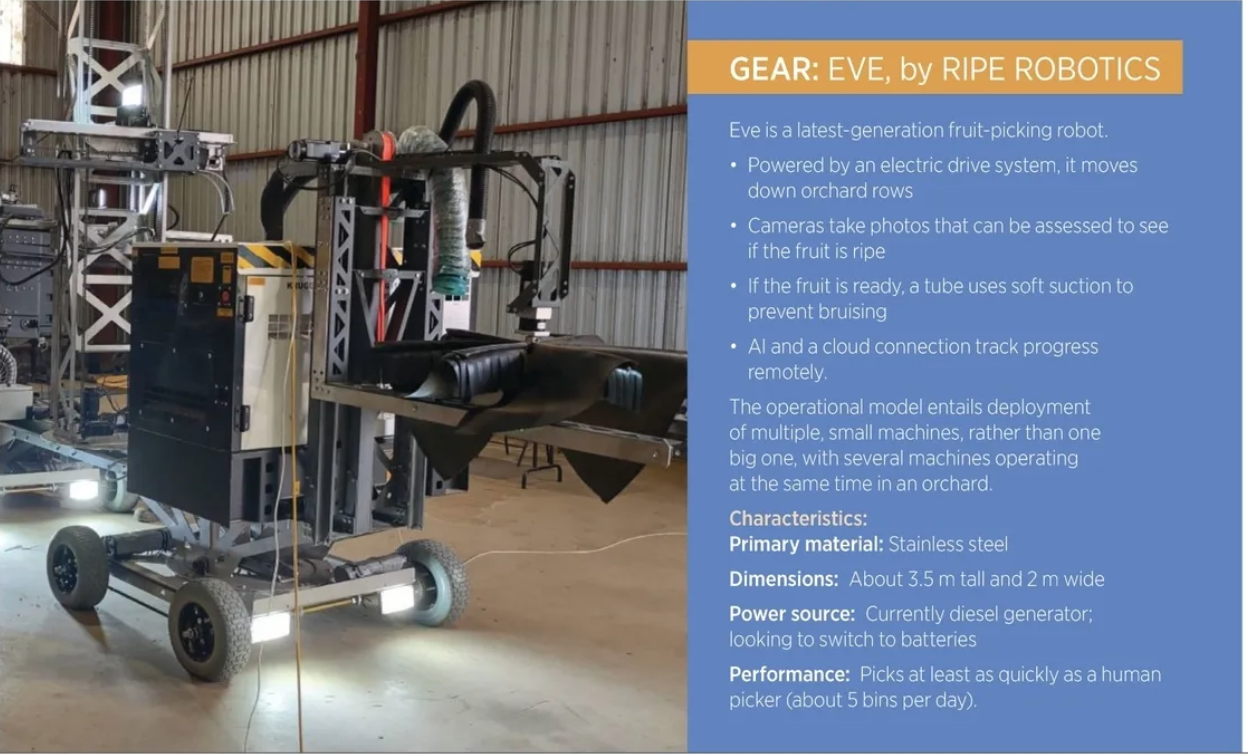 Some of Ripe Robotics’ competitors sell machines for hundreds of thousands of dollars, requiring up-front capital investment from growers who may be hesitant if the technology is still evolving. “Our service model allows farmers to get the immediate benefits of the technology at an operational cost comparable to human labor costs,” Lucas said. “As the technology improves, we can implement design changes. Eve is our third version and we now have a new one called Newton, which will be debuting in the upcoming apple season.”

Ripe Robotics has learned lessons since it began its adventure in 2019. “We have tried to dig deep to understand growers’ requirements, from a usability and economic perspective, and we’ve overcome many of the barriers to adopting the technology,” Lucas said. “We have also built strong relationships with growers and industry bodies abroad, to try and validate the lessons we have learned here.”

HOLLAND: MOVING TOWARD THE MARKET

We wave goodbye to Ripe Robotics and trace those piles of fruit as they encounter increasingly minimal human intervention along their path to market. Automatic atmosphere systems control coolrooms to keep fruit fresh. Packing sheds have automatic graders and sensors that detect damage, color and size, and sort produce accordingly, with automated packing to come. Intelligent logistics systems deliver packaged goods to warehouses where they are stocked, sorted and dispatched.

Sorting food items of variable size, texture and volume is cumbersome and time-consuming, and human operators are error-prone and sometimes risk injury. As the demand for more efficient loading and unloading of groceries rises, robots are being enlisted to carry goods and set them in racks with care and accuracy, saving labor costs and time.

Smart Robotics is a Dutch company that makes a compact, end-of-line “cobot,” i.e. a collaborative robot that interacts and shares space with human operators. “We deliver automated picking solutions for warehouses,” Smart Robotics CTO Heico Sandee said. “Our Smart Palletizer can arrange a large variety of products in different stacking patterns. A combination of deep learned perception and task planning makes our solution highly innovative.” Advances include specialized, lightweight printed grippers, and it can stack various boxes of up to 8 kilograms. The cobot autonomously determines grasp pose and motion, without prior knowledge of the target item.

The company was founded by Sandee and Mark Menting in 2015. They knew there was a need for a technology that could do very complex, vision-based picking. “We developed a platform and we now have several applications,” Sandee said. “It took us a year to deliver the first simple solutions, and now, after 6 years, we are solving very complex logistics challenges, where only a handful of global players can deliver working solutions.”

Smart Robotics comprises a team of 70 and boasts an impressive clientele, including logistics giant Vanderlande Industries and the international food company Vandemoortele. It recently announced the closing of a second significant funding round, led by the Dutch high-tech venture capital fund Innovation Industries and Mirai Creation Fund II, backed by Toyota Motor Corporation as a key limited partner.

“The food logistics market is growing exponentially, especially grocery e-commerce,” Sandee said. “Meanwhile, the working population is getting more and more limited and essentially not able to do the heavy, repetitive work robots can do, so there is a huge pull for automation. This is especially true with food, where gentle handling is of utmost importance, and where the variety is gigantic, due to the organic nature of most products.” 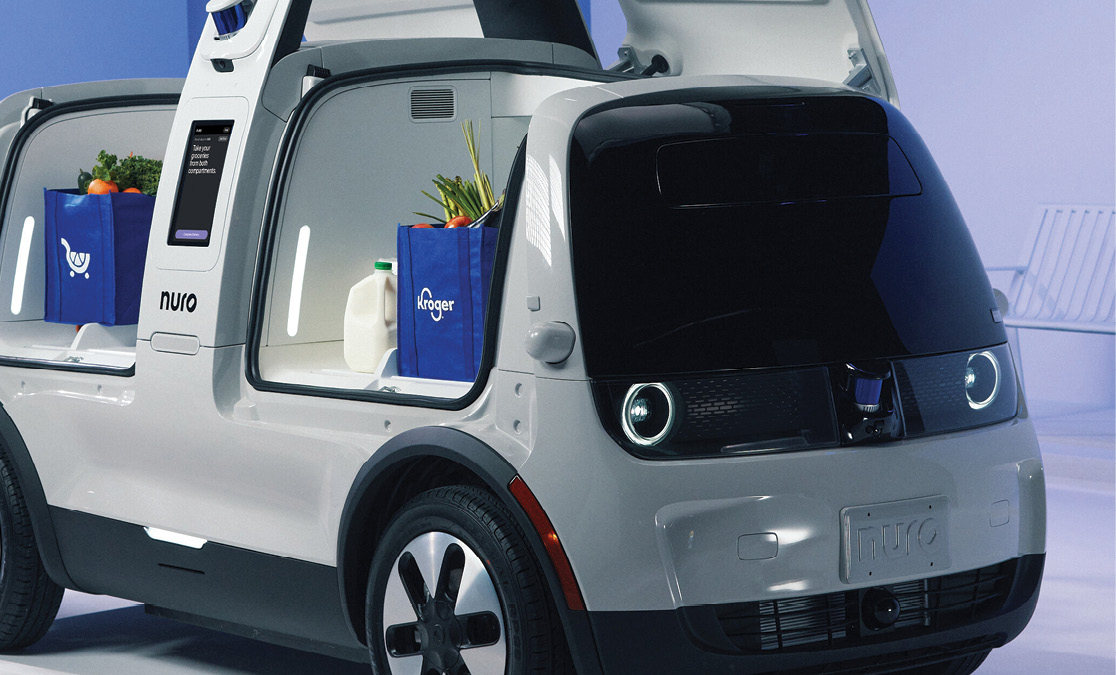 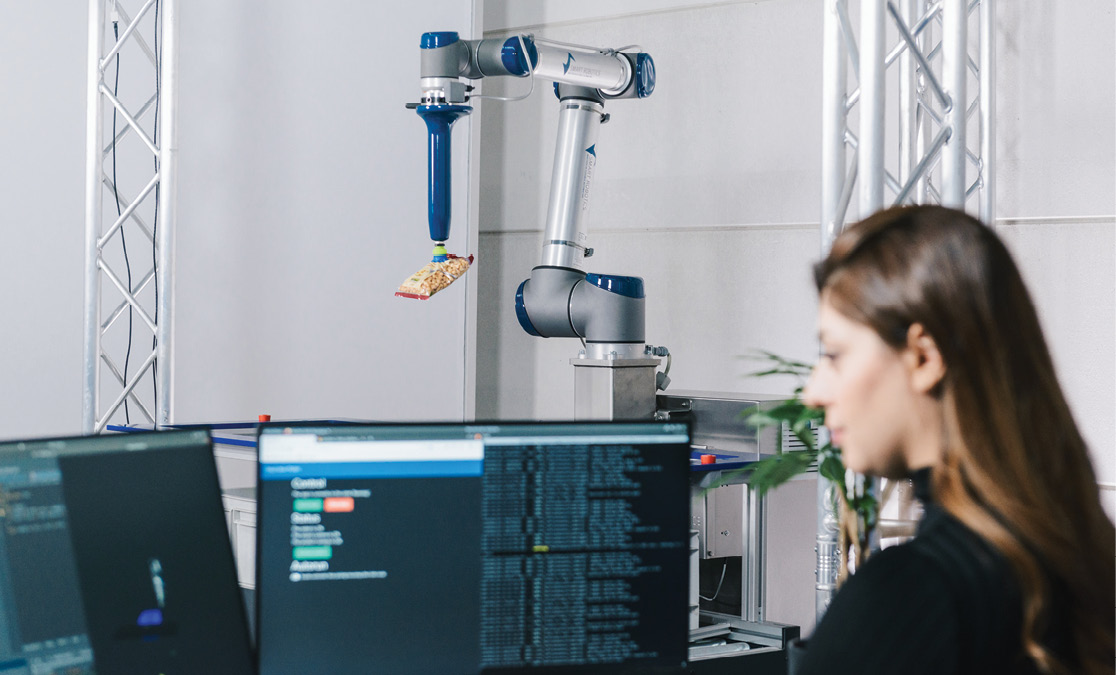 The Smart Robotics Palletizer, in the lab.

U.S. AND UK: DELIVERING THE GOODS

As our virtual tour continues, we reach North America, specifically Mountain View, California, where Nuro has developed an unmanned, autonomous, home delivery vehicle. A spokesperson for Nuro outlined its progress: “Our third-generation vehicle features a multimodal sensing suite, including cameras, radars, LiDAR and thermal cameras, creating a redundant 360-degree view of the world. We combine that with a robust autonomy stack that includes mapping, localization, perception and prediction.”

The vehicle is designed specifically for transporting goods, not passengers, prioritizing the safety of other road users. It features an external airbag and is approximately 20% narrower than the average passenger car, giving cyclists and pedestrians more room to maneuver. Modular inserts in the carrying compartments allow for heating and cooling, so your pizza stays hot while the beer stays cold.

The new model will be produced in partnership with BYD North America and completed at Nuro’s new $40-million manufacturing facility and world-class closed-course test track in southern Nevada. In 2021 alone, the company announced a multiyear commitment with FedEx, introduced Chipotle as an investor partner, and piloted delivery with Domino’s in Houston and 7-Eleven in Mountain View. Nuro also formalized a commitment to leverage the company’s third-generation vehicle with grocery leader and long-standing partner/investor Kroger.

“People want everything delivered, faster and more affordably,” a company spokesperson said. “Historically, speed comes at a cost, but Nuro is changing that. We believe you should be able to get what you need when you need it, whether it’s groceries, dinner, fresh fruit or prescriptions.”

San Francisco’s Starship Technologies has been testing a similar home delivery technology in the UK. The company’s robots are designed to deliver food, groceries and packages locally in minutes. The system has already logged millions of miles and completed more than 2,000,000 autonomous deliveries around the world.

Starship Technologies robots are powered by zero-carbon electricity, and the Council of Milton Keynes, where the robots have been tested since 2018, is particularly interested in their green credentials. A Starship Technologies report suggested the company was up to snuff: 280,000 car journeys have been avoided during 500,000 miles (804,672 km) of trials, saving 137 tons of CO2 and 22 kilograms of nitric oxide (NOx) emission. One advisor was heard to compare the energy consumed by an average delivery to that consumed by boiling water for a cup of tea, which many of our British friends will find a cozy thought.

As we sit down to our autonomous-powered dinner, we pause for a bit of conversation. Fair questions, after all, can be asked among friends. At this moment, many thousands of human workers are still employed across the food industry, from tractor drivers to fruit pickers, box movers and delivery drivers. As time passes, more and more robots will be doing these jobs. To what extent will automation impact future unemployment? On the other hand, there are specific labor shortages where automation is actually filling costly productivity gaps.

An economic impact study by transportation specialists Steer, commissioned by Nuro, revealed a number of potential benefits resulting from automated food delivery, including new job creation, stimulation of local economies, reduced traffic accidents and injuries, and a big reduction in CO2 emissions. There is clearly an argument to be made in favor of automation in the food industry, even beyond the profits made by the developers of these technologies and the businesses that use them. How they will play out is worth our attention. Meanwhile, let’s eat. 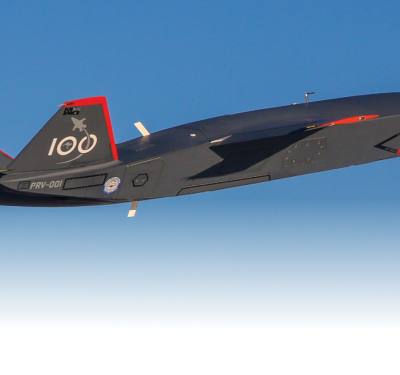